Taking a Shine to Platinum 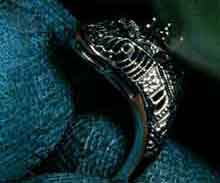 To finish platinum – whether through hand polishing or mass tumbling – you first must understand the metal and its unique properties.To be successful in polishing platinum – which, like so many processes involving this popular white metal, poses special challenges – you must observe one rule above all others:You must think platinum.

Let me explain. Platinum takes more effort to polish, for the simple reason that it does not wear as other precious metals do; consequently, it doesn’t follow the same metallurgical rules. Platinum, you see, has a “liquid” surface. Other metals lose mass over time – prongs wear thin, shanks get thinner, decorations such as Florentine or engravings wear down. All of these deteriorations take a lot longer with platinum. The metal even scratches differently: When you scratch platinum, you are actually just moving the metal aside, whereas other precious metals lose surface area. While this is a major advantage in durability and contributes to the strength of platinum, it also makes the polishing process more difficult.

When polishing, you are actually making finer and finer scratches on the metal until the light reflects a mirror-like surface. While a perfect polish is not possible on any metal – you’ll always see the scratches under magnification – it’s even tougher to achieve with platinum. To do so, whether through hand polishing or mass tumbling, the surface of the metal has to undergo a series of important steps. More vital, the polisher has to understand the properties of platinum, its abilities and limitations – all of which I am happy to share with you now.

First, you need a clean workspace. Platinum can be easily contaminated: Just as lead is a contaminant to gold, most other metals can be contaminants to platinum. If, for example, small particles of a different metal attach themselves to platinum, and the platinum is then heated to a level past the melting point of these particles, they will melt into the platinum and thus contaminate it. (The melting point for platinum and platinum group metals ranges from 3,214 F to 4,429 F, depending on the alloy, compared to 1,948 F for fine gold and 1,762 F for fine silver.) So it is very important to set aside files, emery paper, sandpaper sticks, and buffs just for platinum, and to separate platinum compounds and wheels.

It’s also good practice to frequently change emery papers and dress buffing wheels, as well as to recharge polishing buffs after each dressing. When polishing, you are actually removing metal, and some of that metal will adhere to the felts, buffs, and brushes. This can cause scratches and intensify the polishing operation (which can be intense enough!).

Prep work also needs to be done during the fabrication stage. Scratches that aren’t removed early will not go away with repeated polishing; they will only get worse. In fact, it’s good practice to polish some portions of a platinum design before assembly. That’s particularly true when you’re joining platinum with karat gold: Since karat gold polishes more quickly than platinum, you run the risk of over polishing the gold if you leave all the finishing work until the end. To prevent this, finish the platinum segment completely prior to assembly. (Since platinum will not oxidize during soldering, you don’t have to worry about solder altering the finish.)

Once you’ve set up a clean area and have taken all precautions, you must ask yourself a basic question: Which method will achieve the best results, mass tumbling or hand polishing? The answer depends on the items being finished. Mass tumbling saves time and produces an adequate shine on platinum chain, beads, or other items without sharp edges. Hand polishing, however, provides a more precise lapping on items that do have sharp corners – a channel ring, for example. If you choose to tumble such pieces, you should always follow up with hand polishing.

When mass finishing, use either a barrel rotary or a vibratory tumbler. (Magnetic tumblers also offer good results, especially for polishing such hard-to-reach areas as the insides of rings.) With rotary and vibratory finishing, you’ll want to employ a three-step process. First, attack the platinum surface by tumbling the pieces in an abrasive compound, using ceramic media designed for heavy cutting. Next, switch to a soap-based compound and a ceramic media with a finer grit. Finally, use stainless steel shot with detergent to work-harden the pieces. Detailed items can then be finished by hand (see below, “The Final Finish”).

The exact combination of abrasives and detergents, as well as the amount of time and the rate of speed needed for each step, will depend on the type of jewelry you have. Mass finishing platinum is not an exact science; trial and error is the only way to determine the conditions that will work best for you. Fortunately, some suppliers that sell tumblers will finish a piece for you free of charge and provide the exact compounds, times, and speeds. This is a valuable and cost-efficient service that can save manufacturers a great deal of time.

Of course, you can also choose to finish the ring totally by hand; while time-consuming, this method ensures all areas of a piece will achieve the desired luster.

Let’s say you have a platinum ring casting. First, examine the casting for flaws and remove the sprue. After checking and verifying that the ring size is correct, start sanding the inside of the shank. File gently, smoothing any uneven areas and being careful not to remove too much metal; you just want to remove the casting skin and not bite into the ring itself. Sand the surface to a 600 finish by starting with a #4-cut file for high spots, then follow that with a #6-cut file before finally switching to sandpaper.

If you did not use too rough of a paper (anything over 320), the surface should quickly achieve the desired finish. Now stamp the inside of the shank with the quality mark and the maker’s mark, and finish up by using 4/0 polishing paper on the inside of the ring. (An inside ring mandrel works quite well for this.)

Now look at the outside of the ring. File the remainder of the sprue even with the ring, being careful not to leave deep grooves by using too coarse a file. Lightly file in a diagonal direction, then switch to the opposite diagonal direction to break up the file marks. (The action is similar to florentining a ring.) Now switch to a #6-cut file and repeat the process. When filing a curved surface, follow the curvature and try not to create flat spots on the product.

Next, using a sandpaper stick with 320 paper, make the scratches even finer. Follow that with 400 paper. As an alternative to sandpaper, you can also use rubber wheels charged with abrasives; they range in grit from about 180 to 800 and leave a smooth surface. There are constant improvements being made in the quality and effectiveness of these wheels; check with your technical adviser at the tool supply house to make sure you have the best one for your needs.

After you’ve brought the outside of the casting to a 400 finish, you’ll want to use a burnisher and polish the entire piece. While it takes a few minutes, burnishing will actually save time in the long run: It will compact minor porosity, eliminate soft areas, and add shine.

The burnishing process can be done either by hand or in a tumbler with polished beads. If it is done by hand, the tool of choice is a Tungsten burnisher, which rubs a highly polished rod of Tungsten over the surface of the platinum. Before you start, though, be sure the burnisher’s surface is highly polished; if it’s at all scratched, you will transfer those scratches to the ring. Using a light oil for burnishing, such as oil of wintergreen, will prevent the burnisher from skipping and marring the platinum.

Finally, you can bring the platinum to a high polish by using assorted platinum compounds, buffs, brushes, and felts.

The number of compounds for platinum is plentiful, but you’ll usually start with an 800 grit polishing compound, follow that up with a 1,500 polishing compound, buff with a 4,000 cutting compound, and finish with the next finer polishing compound (in this case, 8,000). Between all of these steps, it is vital that you clean the felts, brushes, and buffs, as well as the ring’s surface, to avoid contamination with the lower grits. (Washing your hands is just as important, since your fingers will have compound on them too.)

As with mass tumbling, you’ll need to experiment to decide which compounds work best for you. (Some companies offer sample kits with different grits, a convenience that can help make the selection process easier and less expensive.) For polishing the metal to a high luster, I like rouges containing chromium oxide (e.g., green rouge) or aluminum oxide (e.g., white rouge, orange carrot). And of the many available abrasives-natural (lime, garnet, and silicon) and artificial (aluminum oxide, silicon carbide)- I prefer the artificial: They cut the metal faster, offer better uniformity in particulate size and shape (which helps provide a more uniform finish), and last longer.

When buffing with an abrasive compound, you’ll need to generate enough heat to get the metal almost flowing. To accomplish this, you’ll wand to select a larger diameter buff. For example, a 4 inch buff will have a surface speed of about 3,600 feet per minute, while the speed of a 6 inch buff is about 5,400 feet per minute. The greater the speed, the greater the heat. You must also pay attention to the buff’s physical characteristics: Hard felt flat-laps work best for corners and edges, while horsehair brushes produce a nice shine on filigree and other details.

When buffing, apply the same method as for filing: Buff on a diagonal direction, then switch to the opposite diagonal direction. (When polishing over a solder seam, polish across it rather than along it; this will prevent you from pulling out the solder.) During this process, do not let loose metal and compound build up on the ring; this will cause the buff to glaze and consequently scrape the ring’s surface.

Repeat this operation with the next finer polishing compound, using an untreated stitched muslin buff; this should give a highly reflective surface and a lustrous finish. And there you have it: one polished platinum ring. If you’d like, you can even bring out the polish further by applying additional finishing techniques – florentining, stippling, or sandblasting, among others. Since platinum does not oxidize or tarnish, these extra finishes will not harm the ring, instead presenting a nice texture to contrast with the meticulously polished areas. It’s all just part of the platinum experience-and of learning how to “think” platinum.